The Excitement is Back

Leonardo Bittencourt in the Mixed Zone on Tuesday

The Bundesliga return is getting closer day by day. SV Werder Bremen face FC Köln at the Rheinenergiestadion on Saturday evening (21/01 at 18:30 CET). For Leonardo Bittencourt, this match is special, since the 29-year-old played for the Effzeh for three seasons. On Tuesday afternoon, media representatives in the Mixed Zone were very interested in the German-Brazilian.

“That was the longest winter break we’ve ever had in the Bundesliga,” said Bittencourt. He is in high spirits as the league finally restarts this weekend, having worked with a personal trainer during his holiday in Brazil. After many training sessions and friendly matches, the Bundesliga is now on the agenda again. “This week,” Bittencourt stressed, “the real excitement comes back when you know that you have a league match on Saturday." 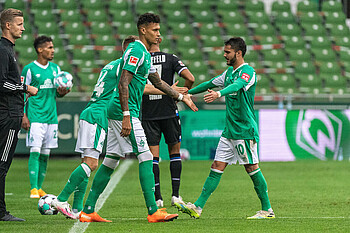 Bittencourt was in contact with Selke before the latter’s move to Cologne (Photo: nordphoto).

The journalists were also interested in the contact the Leipzig native had with Davie Selke in the run-up to the match. Both played together for the Green-Whites, but Selke recently transferred to FC Köln. “When the move to Cologne became more concrete, he asked me about the city and the club,” Bittencourt revealed. “I gave him my honest advice privately. This week we have had no contact and it will stay that way. During the match there are no friendships. When the match is over, you sit down together and then you have enough to talk about.”

Bittencourt would rather focus on his own situation: the league table is a good interim report, but that will not suffice to end up with enough points at the end of the season. “Personally, I want to build on my performance in the first four games. I was top fit then and my two goals showed how important a full preseason is,” said Bittencourt. “We as a team always want to improve and finish the first half of the season in the best possible way, and then start the second half of the season well and collect points quickly. We want 40 points as quickly as possible, that’s the goal.”