“We now have the chance to make up for it on Wednesday.”

When Romano Schmid watches his team play, it can definitely get quite loud. “I’m very emotional for sure,” the 22-year-old revealed on Monday morning in the WERDER STROM Talk. “I often start shouting too.” Schmid probably reacted like the many Werder fans on Saturday evening who rooted for the Green-Whites in front of the TV. The Austrian is convinced, however, that the defeat against Köln will not throw him and his teammates off course.

Romano Schmid did not travel to Cologne with the team due to an MCL tear picked up during winter training camp in Murcia. The lively midfielder is expected to miss several more games. “It hurts even more when you can’t be there on the pitch yourself,” said Schmid, “I’m desperate to get back and help the team.” 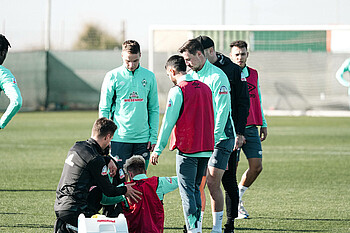 Next week, Schmid is expected to train with the ball on the pitch again, and afterwards they will see how it goes. He firmly believes that the team will pick up points in his absence. “There’s no ignoring what happened against Köln, but it’s also nonsense to say that we’re on a downward spiral, because the defeat has to be looked at separately due to the long break,” stressed Schmid. “Of course everyone is angry at themselves, because it was a poor team performance, but we now have the chance to make up for it on Wednesday.”

SVW will host 1. FC Union Berlin at the wohninvest WESERSTADION for their first home game of 2023. It’s getting old to talk about the Eisern as a surprise team after a strong first half of the season that sees them in third place. “They maintain the same style of play under Urs Fischer and focus on their strengths,” said Schmid, “we’d benefit from doing the same, because whenever we have been on the top of our game and played to our strengths, we have also won games.”

28.01.2023 / Match Report
Your web browser ist outdated.
The web browser you are using is no longer supported.
Please download one of these free and up to date browsers.
Why should I use an up to date web browser?