Match reaction to the draw against VfL Wolfsburg

SV Werder Bremen took a point from their first league game back in the Bundesliga after a fast-paced and evenly-fought match away to VfL Wolfsburg. Despite leading for large parts of the game, Wolfsburg’s Joshua Guilavogui equalised late on to crush Werder’s dreams of getting their first victory of the season. “I’m disappointed. Given how we played in the second half, you could say a draw is somewhat a fair result, but we were by far the better side until the 80th minute,” Leonardo Bittencourt had his say on the result. 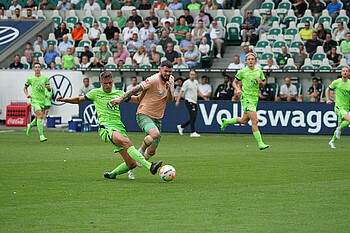 SV Werder had chances to build on their lead (photo: W.DE).

Ole Werner: “I’ve got mixed feelings. On the one hand, we led for a long time and didn’t give our opposition too many chances, but on the other hand, we could have been travelling home with two more points. However, we put in a strong performance, especially in the first half, and that should be the main thing to take away from today. We try to play football that plays to the strengths of our players, and the lads did that well today, winning back possession well, defending strongly and creating plenty of chances. During analysis tomorrow, we’ll see more clearly just what we need to improve on, however we’ve more than show we’re capable of holding our own in this league. Today’s game was nothing different to what I was doing last year. I’m just doing my job, and fundamentally, nothing’s changed.”

Marco Friedl: “It was really fun, and we did particularly well in the first half. In the second, we let ourselves get run around by Wolfsburg a bit too much and didn’t quite implement our game as much as we wanted to. Wolfsburg also gave it everything they had, but when you dominate a game for so long and don’t win, of course you’re not pleased.”

Jens Stage: “It was really hectic, just as I was expecting. We started well and performed well over long stretches of the game. We also worked well together, and I think it was a good game. What pleased me the most was our intensity – we can definitely view that as a positive and we also want to keep that up. Everyone plays with great will too, we’re a real team and played that way.”

Leonardo Bittencourt: “Wolfsburg are an ambitious side and showed that today, we needed to defend well against that. They punished the slight mistakes that we made.”

Milos Veljkovic: “It’s obviously difficult against a team which possesses such high quality, but we put up a spirited fight against them as a team. We were even on top for large parts of the game. We’d already shown in the Bundesliga 2 last year that we like to attack from the off, we didn’t want to change that aspect to our game because it worked so well last year. We pressed well, but we also had to change up our strategy somewhat during the course of the game, so we set up a bit deeper in defence and it was through that that we made small mistakes which were swiftly punished now that we’re back in the Bundesliga.”

Marco Friedl: “We were definitely by far the better side in the first half, but Wolfsburg had more possession after the break, despite not creating many good chances. Therefore, we’re frustrated with the final result, to not have won and to settle for the draw.”

Milos Veljkovic: “We want to take something away from every game, which we have done today. Of course we wanted to win, but it just wasn’t to be today.”

Jens Stage: “We’re a bit disappointed. It’s super annoying to have conceded late on. We had our chances to win the game and we would have deserved to come away with three points.”

Leonardo Bittencourt: “I’m disappointed. Given how we played in the second half, you could say a draw is somewhat of a fair result, but we were by far the better side until the 80th minute. In particular, our first-half performance was exceptional. To come away with just a point hurts, and it would have been a lot better to begin the Bundesliga campaign with three points.”

Marco Friedl: “I heard that not all of them came to the game today, which was tough for us. I’m very sorry for those fans, but the ones in attendance gave it absolutely everything. We want to celebrate together with them all next week.”

Jens Stage: “It was a lot of fun and considering it was an away game, the fans supported us really well, they were amazing. They were so loud, it was like we were playing at home.”

Amos Pieper: “You definitely heard them more than the Wolfsburg fans, and the way they carried us through the game was brilliant. It was that the first away game had the atmosphere of a home game.”

“A tremendous footballer with a massive heart”

Squads for Pizarro’s testimonial are here!

Schmidt makes his debut for Austria

22.09.2022 / Match Report
Your web browser ist outdated.
The web browser you are using is no longer supported.
Please download one of these free and up to date browsers.
Why should I use an up to date web browser?