Reaction to the defeat against Köln

It wasn’t easy for the Werder players and coaching staff to talk to the media after the 7-1 defeat against 1. FC Köln. Nevertheless, a number of them still spoke about the 90 minutes. “We simply weren’t good enough and played into their hands,” said captain Marco Friedl.

Head coach Ole Werner: "We effectively scored the first three goals for them. Our tackling was poor after that and we barely managed to complete a single pass. It was a terrible performance and there are no positives to be taken from it. It’s important that we learn from this and ask ourselves why this happened. Nothing at all went well today."

Head of scouting & professional football Clemens Fritz: “Nothing went to plan today. We deserved to lose so heavily. Köln were better than us in all regards. It was such a poor performance – by everyone. You won’t win any games if you play like that. We have to improve quickly and show a reaction.” 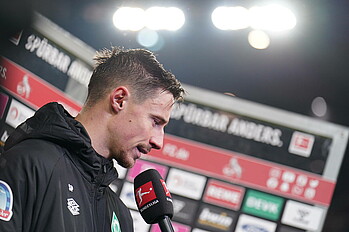 Marco Friedl and his teammates were self-critical after the game (Photo: W.DE).

Marco Friedl: “We gifted them the first five goals. We simply weren’t good enough and played into their hands. We knew what to expect, but got everything wrong. We all knew we’d have difficult periods. We now need to recover as a team together. Thankfully we’ve got a chance to do so on Wednesday already.”

Leonardo Bittencourt: "They ran rings around us. Köln even announced their team two days ago and knew how we’d play. They dominated us and deservedly won the game. I don’t know what positives we can take from this. We simply have to put it in the past and move on.”

Mitchell Weiser: "I can’t say what exactly has just happened. This is down to us and we can’t just say that we lost because of their quality. All of us were abysmal. You have to talk about it when you perform this badly. Nobody is exempt. Us older players have to question ourselves, including myself. It’s unacceptable and we cannot perform like this. It won’t happen again, I promise that.”

Niklas Schmidt: "We made too many mistakes and were so poor. You have to be brave and get stuck into challenges in competitive games. All parts of our game were bad. We made too many basic errors and it’s always tough to come from behind in Köln.”