Looking ahead to the away game against Bayer Leverkusen

It has been a near perfect start for Werder away from home this season so far – with seven of nine possible points taken on the road. Ole Werner wasn’t able to explain this away record at Thursday’s press conference, commenting: “I just make sure that me and my team work prepare week by week for every game, and work on the things that will make the difference in any given match. Then we try, regardless of where we are playing, whether Bremen or elsewhere, to bring our best performance to the pitch,” said Werner before the upcoming away fixture against Bayer Leverkusen on Saturday (15:30 CEST).

Team news: There are no changes to the Werder squad that was available to face Augsburg last weekend. Leo Bittencourt remains unavailable due to a strain in the rib area, while Manuel Mbom and Dikeni Salifou are both out. Goalkeeper Jiri Pavlenka is available once again after taking a knock to the upper thigh against FCA: “Pavlas is fit – there’s nothing stopping him from being in the squad,” confirmed Werner.

Werner on the opposition: “They’re a team that play in Europe. Leverkusen have players of lot of quality and great pace. They belong in the top three, top four of the league based on the quality of their squad, which is the sort of ambitions they have too. Leverkusen is a prime example of the table after six matchdays being effectively meaningless. We knows that it’s going to be a very tough away day for us, regardless of their previous results,” said the Werder coach. 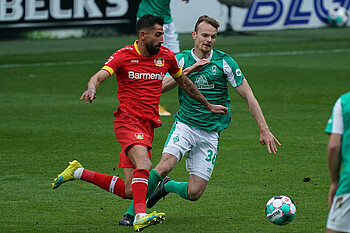 The last two meeting between the sides have been draws (Photo: nordphoto).

Previous meetings: The league record is in fact in the Green-Whites’ favour, leading with 35 victories to Leverkusen’s 25. The teams have had to share the spoils 34 times. The teams last met in the Bundesliga in 2020/21, with both games drawn (1-1 and 0-0).

Statistics: Werder have not earned more points against any other top flight opponent than Leverkusen since they were promoted to the Bundesliga in 1979 (114, level with Hamburg). Only against Stuttgart (142) have the team from Bremen scored more goals than against the Werkself (124).