Looking to work hard from the word go

Preview to the DFB-Pokal first round tie against Energie Cottbus

SV Werder Bremen have had an intensive week of training as they prepared for their first competitive game of the 2022/23 season. Monday evening (18:00 CEST) will see the Green-Whites face Energie Cottbus in the first round of the DFB-Pokal, less than a week before the Bundesliga campaign kicks off. Ole Werner and his side will look for a professional performance against the fourth division side to qualify for the next round, and the head coach appeared optimistic following the week’s work: “There was a lot of hard work on show, which is what we want to see. I’m sure our lads will be present from the first minute on Monday,” explained the 34-year-old in his press conference ahead of the tie.

Team news: Ole Werner will have several players missing for the season opener. Manuel Mbom is continuing his recovery from a ruptured achilles tendon, whilst both Eren Dinkci (muscular issues) and Benjamin Goller (ankle) were both unable to train during the week. Abdenego Nankishi and summer signing Niklas Stark are both ill and will also miss out on Monday. On the other side of the coin, Anthony Jung has returned to team training following a thigh injury. “He is fit, but he has missed quite a lot of match practice in pre-season. Despite that though, we are considering him an option,” explained Werner.

Ole Werner on the opposition: “Cottbus are a side who have a very clear way of playing football, and usually defend on the front foot. We definitely won’t be expecting a park-the-bus kind of team, rather we’ll be facing an opponent who are used to playing in a clear structure from the back – they have a good rhythm and their own strengths in technical areas. It’s a team who can play some very good football and will definitely look to do that on Monday,” said the 34-year-old. 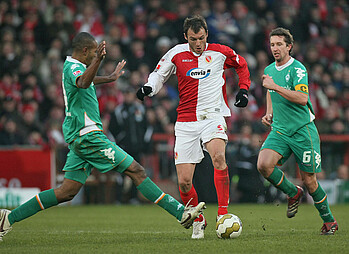 Tale of the tape: SVW will be facing Energie Cottbus for the 13th time on Monday. Of the previous dozen games, the Green-Whites have won half, with four FCE victories. The last meeting between the two sides came in February 2009 at the Stadion der Freundschaft – Hugo Almeida’s opener for Werder was cancelled out by the home side, who came from behind to win. Back then, both Frank Baumann and Clemens Fritz were playing for SVW. Fritz does not look back on the meeting with fond memories: “I remember that it wasn’t a great game. The atmosphere was fiery, so I think it will be a very important point to be in the game from the very first minute,” said Werder’s current director of professional football and scouting.

Returning home: Leonardo Bittencourt is going back to where it all began, as he visits his home town of Cottbus. Werder’s current number 10 made his professional debut for Energie, having played in every one of their academy teams. “It’s going to be a special return. I’m really looking forward to playing at the stadium all these years later. I’m really excited for the game,” said the attacking midfielder.

On a role against fourth-tier opposition: SVW have not lost a DFB-Pokal match against a team from the fourth division or lower since 1963. They have taken 16 wins from all 16 matches, and only once has one of these ties gone to extra time, against FV Illertissen in 2014.

A difficult test for Bundesliga sides:  Energie Cottbus have been the scourge of many a Bundesliga club in recent years. Hoffenheim were forced into extra time against them back in 2013/14 before coming through, whilst each of HSV, VfB Stuttgart and SC Freiburg had to beat them in penalty shootouts. FCE’s most recent Pokal tie came in 2019/20 against FC Bayern, and the home team caused the record champions several problems over the course of the match.

Compiled by WERDER.DE and Opta.