“Looking forward to the new challenges that await”

The first Bundesliga game of the 2022/23 season awaits SV Werder Bremen from 15:30 CEST on Saturday, 6th August, with Ole Werner’s side kicking off their campaign in the Volkswagen Arena against VfL Wolfsburg. As a newly promoted club, the Green-Whites will go into the game as underdogs, but the boss still backs his team to produce a commanding performance. “Wolfsburg are a quality side. Nevertheless, we want to stick to our routines and bring our strengths and our football onto the pitch,” explained the head coach at his press conference on Thursday.

As always, Werner gave little insight into his line-up, although it is known that Salifou, Dinkci and Mbom will remain sidelined: “Benni Goler was back on the training pitch, but we’ll have to wait and see if he’s an option. Niklas Stark is fit again, and Leo also didn’t pick up anything serious in the Cottbus game. The same goes for Lee Buchanan. So there are just the three players we already knew about that are definitely out, and we’ll see tomorrow how the squad will shape up.” Places in the travelling party remain up for grabs then during tomorrow’s final training session: “The players that already featured on Monday have obviously already been able to showcase themselves,” said Werner, adding: “Still, it’s not set in stone that we will play with the same line-up as we did in Cottbus. They are two very different games, and we will treat them as such.” Even though tough opponents await in the form of VfL Wolfsburg, the boss doesn’t want to let that affect his preparations. “We know the quality that Wolfsburg have. Nevertheless, we had a good preseason, we’ve added elements to our game and fine-tuned our playing style,” said Werner.

Show our quality, even as underdogs 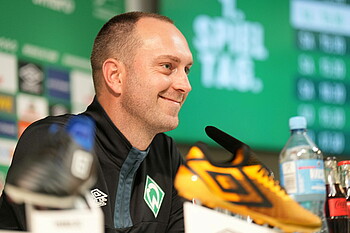 Werner doesn’t question that Werder will adopt the role of underdogs in Wolfsburg, but still prefers to focus on his side’s own strengths for the away trip: “Our approach for the whole season should be that we play our own football and don’t shy away from the task. Wolfsburg have a great deal of quality and real strength in depth, so we will see as the game progresses how best we deal with that. We need to be wary of their pressing. Wolfsburg have a clear identity and will want to show dominance – we need to stop that from happening,” said the 34-year-old. The shorter training week doesn’t have any effect on the mindset going into the game. “There wasn’t as much time to shift our focus to Wolfsburg following on from the cup game, but the goal remains to avoid any sloppiness and keep our concentration levels high,” explained Werner, who didn’t want to get drawn into any comparisons between the two matches: “There is just too big a difference between the fourth tier and the top flight.”

This will be Ole Werner’s first Bundesliga game as a coach, and he is already well aware of the differences between working in the first and the second division. “After three years in Bundesliga 2, of course it’s a change; you’re up against different opponents of a different calibre and everything becomes a touch more complex. But I’m looking forward to the new challenges that await and the experiences that we will share as a team,” said the coach. The Bundesliga also offers new counterparts in the opposition dugout, starting with former Bayern coach Nico Kovac, who took over at VfL ahead of the new season. “He is an incredible coach – he has had success at every club he’s been at. I very much expect him to do the same at Wolfsburg and that we will have a tough task on our hands on Saturday,” explained Werner, before, however, reminding the journalists once more of his approach for the season: “No matter who we’re up against, we want to play our football.”