A mix of excitement and nerves

Amos Pieper has arrived at SV Werder. The defender earned his spot in the starting XI for the first competitive game of the season in the cup against Energie Cottbus on Monday night after seven weeks of pre-season. The 24-year-old also seems to have fit right in off the pitch in Bremen. The new signing spoke the media on Wednesday about his new club and surroundings. “I really like it here so far. I like the team, the club and the whole infrastructure. A number of reasons for my transfer here have been backed up since I arrived,” said Pieper.

After “a pre-season that was really tough at times,” Werder’s new number five is looking forward to the first Bundesliga game of the season on Saturday, 6th August (15:30 CEST). “I’m particularly excited about it because it will be my first league game for Werder Bremen. It’s like a mix of excitement and some nerves. We’ve been preparing for this moment for a long time and we’re all pumped up for the new season,” revealed Pieper. The Lüdinghausen-born defender stressed that starting in the Bundesliga is “really important to him” after being named in Ole Werner’s side for the Cottbus game. “I’ve said before that I would be really disappointed if that wasn’t the case. I started the last game and I want to continue in the team. I have to work hard and prove myself in training to defend my place.”

Pieper pointed out again that the mood around the club is somewhat different to at his former side Arminia Bielefeld. “Everything is a bit bigger here. Werder are more well-known across Germany. Getting promoted back to the top flight at the first attempt is also a good sign, not many clubs manage that.” Even though he wasn’t part of the promotion winning team last term, Pieper can still feel the momentum SVW built up. “We want to continue using this. The first home game will be a totally new experience for me. I think then I will realise how big and powerful the club is. I’ll then know what the club is all about and what’s special about it.”

Passed the first test of the season 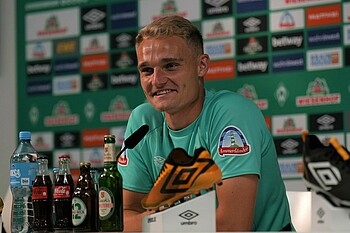 Amos Pieper is excited for the start of the league season (Photo: WERDER.DE).

Even though the DFB-Pokal game against Energie Cottbus took place away from home, Pieper felt that it was a good first test, particularly after conceding the late goal. “We were in control of the game for a long period, had lots of chances and took two of them. The stadium is always going to be loud when they get a late goal like that. We passed the test in the end though.” The next test is against VfL Wolfsburg in the Bundesliga, who have a few lads that Pieper knows well. “They’ve got a lot of individual quality in their ranks. I know some of them really well from my time with Germany U21s, at the Olympics and from Bielefeld (Patrick Wimmer). They’ve got a really, really good team.” Nonetheless, the defender believes every game is open and we will just have to see how tough it will once the game kicks off.

Pieper believes that the team will be well prepared for the clash at the Volkswagen Arena. “You could sense everyone taking training a bit more seriously once the first competitive game approached. Despite that, everyone is still relaxed enough, which is a really good thing about this team. We are still fully focused and up for it once we step out onto the pitch. The German is enjoying Ole Werner’s style of play, even if it means he sometimes has more to do as a defender. “Our approach is brave. We want to get forward and control the game. Nevertheless, we will prepare for each opponent differently and speak about how we want to play. We will always adapt our idea of playing. I really enjoy this style of football. It’s a different kind of game, where you can control the match and the pace of it and you can still do that without committing too many risks.”