A healthy competition for places within the squad

Saturday’s game against Wolfsburg was of dual significance for Ole Werner. It was not only his side’s first game back in the Bundesliga, but it was also his first match as a head coach in the top flight. The boss, however, didn’t approach the game any differently: “It wasn’t that different. The matchday procedures were exactly the same, only the opponents had changed,” he explained. Werner is also fully prepared for what lies ahead this weekend: “We know what we are up against when Stuttgart come to town. We are going into it with a positive attitude and we are full of enthusiasm as we go to work this week,” said the 34-year-old.

Ole Werner does not want to be swept up with Euphoria as his side begin their preparations for the first home game of the season on Saturday (15:30 CEST). “It’s important to be objective. We always look at both sides. We emphasise the positive things in our analysis, and there we some positive things against Wolfsburg, such as our general liveliness, the tempo and our courage in possession. But it’s also important to look at the things that we can improve on.” The gaffer is hoping that Romano Schmid can return to face VfB at the weekend. The midfielder missed the game against Wolfsburg because of Coronavirus, but Werner emphasised that the 22-year-old is “doing much better.”  Schmid still needs to have a further test to check his CT level. “If he can actually come back into the team then the obligatory tests will take place and then everything else will follow from that.” 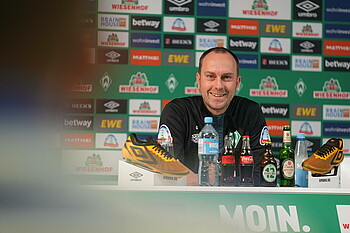 Competition for places is important for Werner (photo: W.DE).

The vacant spot in midfield was filled by Jens Stage and the Dane made a good impression after his strong performance. Werner, however, remained coy when asked who would fill the midfield places this weekend: “We don’t know what will happen over the next week. You have to always be ready to make personnel decisions that best suit the team in that moment.” Werner also made it clear that he is prepared to make changes to the team if it is necessary: “If someone isn’t performing, if someone comes off the bench and makes a good impression or if someone is knocking on the door in training, then as the coach you always need to be open to making changes. That’s why it’s important to have competition for places within the team.”

This “competition for places” is also very much apparent at the top of the pitch. Niclas Füllkrug, who picked up a knock against Wolfsburg, is a doubt for the weekend, which means Oliver Burke could potentially start alongside Marvin Ducksch. “Burke can offer us something a bit different, not least because of his pace,” explained the coach. Forward Eren Dinkci, who has been our for four weeks due to a muscle injury, is also set to return to the squad. “Eren will rejoin the team today as planned but we will need to assess the extent to which he can contribute because he has been out for quite a while. He will, however, be back on the training ground and we will see how he gets on this week.” As well as Schmid and possibly Füllkrug, Werner will also have to do without Dikeni Salifou and Manuel Mbom against Stuttgart.

“A tremendous footballer with a massive heart”

Squads for Pizarro’s testimonial are here!

Schmidt makes his debut for Austria

22.09.2022 / Match Report
Your web browser ist outdated.
The web browser you are using is no longer supported.
Please download one of these free and up to date browsers.
Why should I use an up to date web browser?