Late equaliser secures another away point

SV Werder collected another point on the road against Leverkusen, drawing the game 1-1 after a competitive and enjoyable game. Particularly in the first half, the Green Whites did not give up many chances and kept an attacking Leverkusen side at bay. An unstoppable goal from Kerem Demirbay (57’), fired into the top corner, put the hosts into the lead. Werder kept playing with a lot of team spirit and got a deserved draw after Milos Veljkovic capitalised on uncertainty from Lukás Hrádecky to score a late equaliser (82').

Squad news: Head coach Ole Werner made one change to the team who started the game against FC Augsburg, with Jens Stage dropping to the bench and Ilia Gruev replacing him in midfield. There was one further change to the squad with Eren Dinkci available to the coach once again and making the bench. 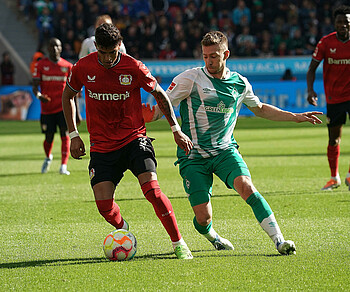 Weiser and his teammates gave up few chances against Leverkusen (photo: nordphoto.de).

Highlights from the first half:

2nd minute: Romano Schmid makes good progress towards the Leverkusen goal before playing the ball to Ducksch on the edge of the box. His effort is too central though, and is easily saved by Lukás Hrádecky.

3rd minute: At the other end, Patrik Schick has a shot from the left-hand side of the box but can only find the side netting.

8th minute: Leverkusen breach the Werder defence and Pavlenka is forced into a save. The Czech keeper saves well and parries the ball to the side.

9th minute: Ducksch finds Jung who is in some space of the left-hand side. After a challenge from a Leverkusen he had to pass backwards to Romano Schmid, whose shot was pushed wide by Hrádecky.

22nd minute: Jung is beaten to the ball by Jeremie Frimpong near halfway, who sprints towards Pavlenka’s goal before Friedl is in a good position to prevent a shot on goal.

25th minute: Callum Hudson-Odoi plays a dangerous ball across the face of goal but no one gets on the end of it. Moussa Diaby shoots from outside the box but his shot flies wide.

29th  minute: Niklas Lomb ball into the middle finds Edmond Tapsoba under pressure from Friedl and Jung, he shoots and his effort goes well over the bar.

33rd minute: Jung plays the ball to Ducksch who lays it on to Füllkrug. He dribbles into the box but his left-footed shot is weak and dribbles past the far post.

35th minute: SVW have allowed very little in the game defensively. Now there is a chance for the hosts through a set piece situation. Robert Andrich gets up highest from a corner but his powerful header only rattles the crossbar.

40th minute: Moussa Diaby sprints towards Pavelenka’s goal before firing a shot on target. Pavelenka saves, but is only able to parry straight into the path of Jeremie Frimpong. However, the Frenchman scuffs his shot and misses the target from yards out!

41st minute: Moments later Werder are on the attack, with Füllkrug finding Ducksch on the left-hand side, he dribbles for a few strides before lashing a shot into the side netting. Shortly after, the Green-Whites win the ball back again and Füllkrug is put through on goal on the right-hand side of the box. Lukás Hrádecky rushes out and blocks his goalbound effort, keeping the game goalless. 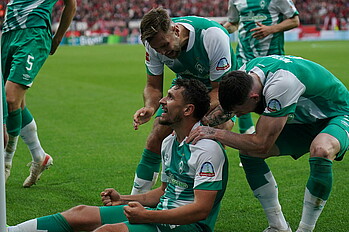 Highlights from the second half

48th Minute: Weiser plays an excellent ball through to Füllkrug who runs to the byline and goes past Robert Andrich. The ball breaks to Gruev on the edge of the box, who has to take a touch and his shot ends up being blocked.

54th minute: Ducksch plays an excellent through ball along the ground to Füllkrug, who does not pull the trigger quick enough, allowing Edmond Tapsoba to get a toe on the ball and clear for a corner.

57th minute: Goal for Leverkusen. Odilon Kossounou plays the ball to Kerem Demirbay, who cuts in from the right-hand side and curls a shot into the top corner past the despairing dive of Pavlenka.  Leverkusen lead 1-0.

63rd minute: The Green-Whites look to get back into the game immediately and come into the game well. Pieper finds a cross looking for Füllkrug, but Jonathan Tah gets up to head clear.

65th minute: A long ball over the top looks dangerous as Moussa Diaby sprints after it into the box. However, Pavlenka is alert to the danger and just manages to clear.

71st minute: Another through ball gives Leverkusen another chance, with Adam Hlozek sprinting through this time but his shot is saved by the diving Pavlenka and goes out for a corner.

82nd minute: GOALLL for SVW! A Werder corner is met by Füllkrug who heads powerfully towards goal. Lukás Hrádecky can only parry the ball into the air, and it falls to Milos Veljkovic who fires through the Leverkusen number one’s legs to equalise. 1-1!

87th minute: Werder break forward in search of a winner. Füllkrug shoots from the edge of the box on his left foot, but his effort is easily saved by Lukás Hrádecky.

88th minute: A freekick from Mitchel Bakker is whipped into Werder’s box and Sardar Azmoun and Niclas Füllkrug both go up for a header, leading to a clash of heads while Azmoun’s header strikes the crossbar. The ball is worked wide but the follow-up cross into the middle goes past everyone.

90+7th minute: Schick recieves the ball in the box before turning and attempting to shoot under heavy pressure. His effort is straight at Pavlenka who easily saves. A goal would have been called for offside anyway.

Summary: It was an intense and hard-fought game. The Green-Whites gave everything today and take a deserved point with them from Leverkusen. After a strong first half, in which SVW hardly gave their opposition any opportunities, they fell behind to a world-class finish from Demirbay. Werner’s team fought their way back into the game through team spirit and perseverance and got a deserved equaliser through Veljkovic to draw the game 1-1.