The Green-Whites - here Leonardo Bittencourt battling against Genki Haraguchi - struggled to get through Union's defence in the second half
Match Report
Wednesday, 25.01.2023 / 22:34

Werder are still waiting for their first points in 2023. The Green-Whites were defeated on matchday 17 by 1. FC Union Berlin, who now sit second place in the Bundesliga. Amos Pieper headed SVW ahead (14’) in front of 41,500 fans in the wohninvest WESERSTADION, but Janik Haberer equalised shortly after (18’). The whistle had barely blown for the second half when former Bremen player Kevin Behrens headed in to put Union ahead (46’) and secure a 2-1 win. Werder end the first half of the season in 11th place with 21 points.

Pieper heads in, Haberer answers with an equaliser

Amos Pieper beats Robin Knoche to the ball and heads in his first Bundesliga goal for SVW (photo: WERDER.de).

Highlights from the first half:

6th minute: A goal scare in Werder’s penalty box, as Pavlenka takes too much time after Friedl’s back pass and is tackled by former Bremen player Behrens, but luckily the ball goes past the left post.

13th minute: GOALLLLLL! Amos Pieper makes it 1-0 to Werder. Ducksch crosses the ball nicely from a free kick on the left hand side into the box, where Pieper faintly heads the ball through the legs of Rønnow. Werder are ahead!

18th minute: Goal, Janik Haberer makes it 1-1. The Green-Whites gift Union an equaliser straight after. Pieper hits a back pass to Pavlenka short, who saves off Behrens, but Haberer picks up the rebound and rolls the ball into an empty net from 17 yards out.

21st minute: Werder hit the post! Füllkrug plays the ball to Bittencourt with his back to goal in the penalty area, who just beats Gießelmann to the ball, but the defender still does well, and the ball rolls slowly into the left post.

42nd minute: VAR rules out a Union goal. Behrens closes Pavlenka down as he attempts a lofted pass, and the deflection takes the ball to Becker, who cuts inside just outside the box and sends the ball into the top-right corner. However, VAR intervenes, and referee Dankert disallows the goal because the ball struck Behren’s hand.

45th+3 minute: Werder so close to making it 2-1! Füllkrug skilfully takes the ball to the edge of play on the left-hand side and pulls the ball back in the air to Schmidt, who heads from 15 yards out, but Rønnow manages to keep the ball out of the far corner. Shortly after, Bittencourt loops a volley from distance which just lands on the top of the net. 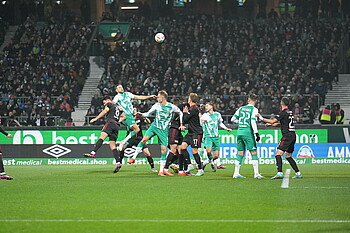 Highlights from the second half:

46th minute: Goal for Union, Behrens makes it 2-1. Juranovic sends a corner into the box, and Behrens leaps beyond Gruev in the air and heads the ball into the bottom-left corner.

53rd minute: Bittencourt is free on the right-hand side and sends the ball straight to Füllkrug, who attempts a volley from 15 yards out, but Rønnow guesses the right way and catches the ball.

58th minute: Werder are of course taking more risks now, which creates space for the opposition, who are strong on the counter. Becker finds some space to dribble on the left flank and shoots from 10 yards, but Pavlenka is up to the task and saves the shot at the near post.

80th minute: Bittencourt hits a free kick well from 25 yards out, and Rønnow is forced to tip the ball over the bar.

84th minute: Seguin crosses the ball from the by-line on the right and Gießelmann jumps to head, but is marked well by Weiser and sends the ball over the bar from close range.

90th+6 minute: Niclas Füllkrug has the last chance of the match, but the striker shoots just wide of the left post from 18 yards. Shortly after, referee Dankert blows the final whistle.

Summary: After a complete capitulation a few days earlier against 1. FC Köln, the Green-Whites had some atoning to do – they were on the right track early on against the Champions League hopefuls from the capital too thanks to Amos Pieper’s opening goal. However, Werder were back to square one soon after, when an underhit back-pass from the goalscorer of all people was punished. And yet, it was a very hard-fought, high quality and even match in the first half in particular. Even though it contained a moment of luck with VAR cancelling out a second Union goal, Bremen could have ended the first 45 on top but for missed chances from Bittencourt and Schmidt. It made Behrens’ unmarked header early in the second half all the more frustrating. The visitors were solid defensively from there on out and cleverly saw the game over the line to take all three points back to Berlin.