“It’s great to be going back home”

Werder’s season gets underway on Monday, when Werner’s side take on Energie Cottbus at the Stadion der Freundschaft. Not only did Leonardo Bittencourt play for Cottbus, but his father, Franklin Bittencourt , is also a former player and former assistant coach. We spoke to the pair ahead of Monday’s clash about their former club, the Pokal and Cottbus' strength at home.

Leonardo Bittencourt is not nervous about facing his old side, Energie Cottbus. At the time of this interview, there are still a couple of training sessions ahead of the game, which our number 10 wants to fully concentrate on: “If you are nervous at this point then you can’t relax and your mind starts to focus on a thousand  other things. I think we will prepare well,” said Leo.

When his father heard that his son would be travelling to Cottbus in the first round of the Pokal, he was delighted: “It wasn’t a bad piece of news to receive; in fact, we actually wanted it to happen. We even celebrated when we heard that Leo would be coming to Energie. It’s great to be going back home!” Leo is also really looking forward to returning to his old club, but he is also staying professional. “It’s great that I will be returning to the Stadion der Freundschaft after all these years. But it is still a game of football like any other. There is certainly a sense of anticipation but the nerves will creep in before the game. But as soon as the game kicks off, you focus on the task in hand.”

Franklin Bittencourt has fond memories of his early days at Energie Cottbus. The Brazillian moved to VfB Leipzig in 1992 and made the switch to Cottbus six years later. “At that time, when I moved to Cottbus, it was very difficult. No one wanted us in the Bundesliga. We had, however, a common goal as a team and we were very strong at home and we beat almost everyone. But unfortunately, we lost almost every game away from home,” said Franklin. Son Leo also warned that Energie are still a very tough team to beat on their own patch: “Even the big teams, like Bayern and Freiburg, have found it difficult in Cottbus. Their strength at home is still there. Playing in Cottbus is difficult for any opponent and it will stay that way. Something indescribable happens in that stadium in such games,” said Leo. The 28-year-old believes that his side cannot afford to underestimate their opponents on Monday: “It will be difficult but I think that if we can do our job and approach the game in the right way, then we will be the better team. If we can bring these to the pitch then I am sure we will progress into the next round.”

Every season is a new start 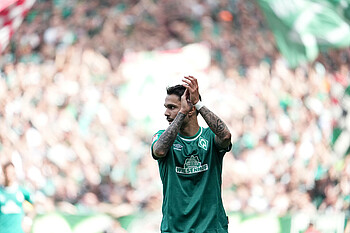 Leo Bittencourt is looking forward to a fresh start this season (photo: WERDER.DE).

Our number 10 is expecting two things at the Stadion der Freundschaft on Monday: a great atmosphere in a sold-out stadium and an opposition that “likes to play good football.” Above all, Leonardo is expecting more of himself after a last year’s mixed season: “It was difficult for me last year. Everyone expected more of me in the second division. I prepared really well and then picked up a knee injury. Initially, it didn’t look like I would be out for long but then I was out for a month. You need to feel your way into the second division and I don’t think I did that. I still think that I helped the team with my experience, especially in games like against Schalke where there was lots of pressure. I believe that I helped to calm my teammates down. We achieved our goal and got promoted and we have another fresh start this season. I hope that I can reach the level I was at for all those years in the Bundesliga.

Franklin is Leo’s biggest supporter and believes in his son’s ability: “I of course know him really well and he has shown at many big clubs that he is a great player. His injury set him back last season but he is fit and I believe in him.”