Preview of Saturday’s clash with Gladbach

Ole Werner is looking forward to the atmosphere under the floodlights (photo: WERDER.DE).
preliminary report
Friday, 30.09.2022 / 18:10

Ole Werner’s Werder are set to take on Daniel Farke’s Borussia Mönchengladbach at the wohninvest WESERSTADION on Saturday evening (18:30 CEST). SVW’s head coach is looking forward to the clash under the floodlights: “These sorts of games are special. It’s sold-out, we’re coming up against a fantastic opponent and we’re in great shape. Games under the floodlights are always special.”

The state of the squad: Ole Werner has almost full squad to choose from against Gladbach. Manuel Mbom is still training individually and working on his comeback after his Achilles tendon tear. Leonardo Bittencourt, however, is once again available for selection after several weeks on the sidelines with a rib injury. According to the gaffer, “All the international players have returned fit and healthy.”

The upcoming opponents: “Gladbach are a very strong team and they try to play out from the back. They enjoy a lot of possession, they play well in between the lines and they are an intelligent side, particularly in the middle of the park. In terms of structure, they are one of the best teams I have seen in the Bundesliga so far this season. I believe we are both teams that try to play football and we both try to develop play through possession. It has all the ingredients of an attractive game of football.”

A penchant for headers and comebacks 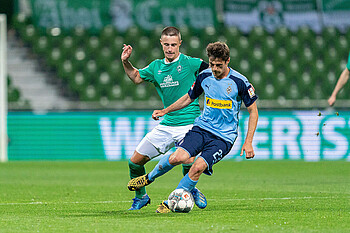 Werder want to pick up all three points against Gladbach (photo: nordphoto).

Previous encounters: Werder and Gladbach have met 104 times in the Bundesliga and the overall balance is slightly in Borussia’s favour. The Foals have 41 wins to SVW’s 38. Werder’s last home win against Gladbach came in August 2015. Aron Johannsson and Jannik Vestergaard scored for the hosts and Lars Stindl bagged for the away side.

Solid at the back, strong at the top of the pitch: Werder and Gladbach are two of four sides that are yet to concede a header this season. While Borussia haven’t scored a header themselves, Werder have already scored five- more than any other team in the league.

Complied by WERDER.DE and OPTA.

Füllkrug and Veljkovic nearing the start of thei ...

21.11.2022 / First Team
Your web browser ist outdated.
The web browser you are using is no longer supported.
Please download one of these free and up to date browsers.
Why should I use an up to date web browser?