It has been some year for Niclas Füllkrug. At the start of it, there were still question marks as to whether Werder would in fact secure their promotion back to the Bundesliga. But at the end of it, the striker was selected for the national team and came away from the World Cup as the German player with the most goal involvements. Despite Füllkrug’s goals and the victory over Costa Rica in the final group stage match, Germany were eliminated from the tournament. Here we speak to Fülle about his whirlwind of a year which has included many ups and downs. 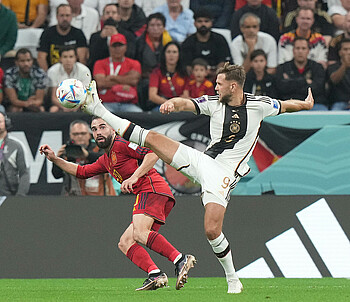 WERDER.DE: Exactly one year ago we were ninth in the 2. Bundesliga. Now you’ve just scored at a World Cup for Germany. How would you sum up these crazy last twelve months?

Niclas Füllkrug: “It has been a turbulent year with many different emotions. From the promotion, to what has now been an emotional end to the year for me. On the one hand, I’m delighted that I was able to experience something like that. But on the other hand it’s so disappointing that we were eliminated from the World Cup at such an early stage because it was so much fun to be a part of. It’s also a shame that the time off the pitch has come to an end already. It has been a mad twelve months and we’ve also had some great moments with Werder in that time, which i’ve also profited from.”

WERDER.DE: How disappointed are you that the World Cup journey for you and your teammates has already come to a close?

Niclas Füllkrug: “I am incredibly disappointed. It’s still tough for me to comprehend that the tournament is already over for us and that there won’t be another one anytime soon. It is really difficult to accept that and to move on. But things will eventually move on. That’s why I’ll try and switch of for the rest of the break and then come back ready to go again.”

I will need to let the whole experience sink in first.

WERDER.DE: Do you still need time for it to sink in or have you been able to process it a little bit?

Niclas Füllkrug: “I will need to let the whole experience sink in first. I think that when I’m on holiday I’ll be able to get a bit of peace and quiet and it will do me a lot of good to have a bit of time away from football. Then I’ll be able to recharge my batteries for the second half of the season with Werder.”

WERDER.DE: Why do you think you have had such a successful 2022?

Niclas Füllkrug: “I always try to work hard and I also invest a lot of time off the pitch. On top of that you also need to be mentally ready. Amongst other things, I think that having this attitude is the reason why I’m on this positive path at the moment. I also have a great team at Werder that have supported me.”

WERDER.DE: You were with the Germany national team for the first time and it was at a World Cup. From what we’ve seen in the media, it seems that you were well received straight away?

Niclas Füllkrug: “That’s right. I was really well received, the team are really mature and grown-up. Everyone had just one goal in mind and that was to be successful but that didn’t come to pass.  However, they are a great set of lads and a superb team. I really enjoyed experiencing the World Cup with them and I hope these experiences continue.”

I tried to not get caught up in the hype 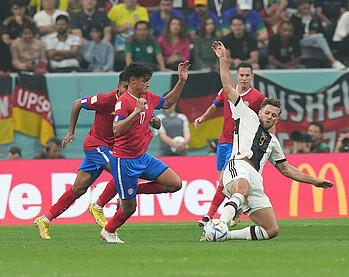 Despite their win over Costa Rica, Germany were knocked out of the World Cup (photo: Nordphoto).

WERDER.DE: After being subbed on for your first international appearance you scored the winner against Oman. What was that game like for you?

Niclas Füllkrug: “Every international was something special for me. But when I’m in front of that goal, it doesn’t matter whether I’m playing for Germany or for Werder. I am greedy in front of goal and I always want to score. In those positions I don’t think much about it and I’m often running on instinct. Most of the time it only hit me afterwards that I’d scored for Germany and that something special had just happened for me. It’s also because I am someone who associates it with pride and honour.”

WERDER.DE: Your success on the pitch was also followed by lots of positive media coverage. How did you deal with the hype that surrounded you?

Niclas Füllkrug: “I tried not to get caught up in the hype. I remained calm and tried to only focus on the things that I could influence. For all the hype that there has been, there were also negative headlines about me not so long ago. So I know to be realistic about it.”

WERDER.DE: With three goals and an assist in your first four games, you’ve made a positive start to your international career. This gives you every chance of being selected again. What do you hope to achieve with the national team in the future?

Niclas Füllkrug: “I would obviously be lying if I said that I don’t want to be a part of it again. It is my goal to play more games for the national team. I think that I have shown that I can help and I would love continue to do just that. For me it’s something really special to play for Germany and therefore I would love to continue to be a part of it. But good performances are crucial if I am to achieve that and I will try to keep playing well.”

First things first I’ll be having a break.

WERDER.DE: You got lots of messages from Bremen. What did you hear from back home?

Niclas Füllkrug: “Ole Werner messaged me regularly. Other people from the coaching staff, from the team and from the club also got in touch. I was always really happy to hear from them and it gave me motivation.”

WERDER.DE: What’s in store for you over the coming days and weeks? Your teammates will be back on the training ground in a week’s time…

Niclas Füllkrug: "First things first I’ll be having a break. It was a long first half of the season followed by the World Cup. It has been a very intense period with lots of training sessions and lots of games in a short space of time. Nonetheless, it has been a lot of fun and it has energised me. Now I’m going to take a step back, have a break and enjoy the time with my family. After that I want to give it full throttle at the training camp and get cracking for the second half of the season.”

The calm after the storm

30.01.2023 / interview
Your web browser ist outdated.
The web browser you are using is no longer supported.
Please download one of these free and up to date browsers.
Why should I use an up to date web browser?