Niclas Füllkrug has extended his contract at SV Werder Bremen ahead of schedule, as announced by Clemens Fritz, head of professional football and scouting at the club on Sunday. 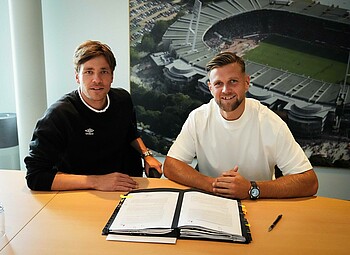 “It’s become clear over the last few days that Niclas would like to stay and that we would like to extend his time here, so we’re delighted that we have been able to sort out this contract extension in a short space of time,” Fritz explained.

Werder’s head coach Ole Werner is also happy that his number 11 will remain at the club. “Niclas is a corner stone of our squad. He’s one of the most experienced players in our young team and is able to lead the group from the front.”

The 29-year-old wants to do just that: “I would love to take on some more responsibility next season. I think that in the season just after a promotion, it's important for the lads who have already experienced the Bundesliga to lead the way, and with this contract extension I’d like to do that in one way or another.”

Niclas Füllkrug returned to Werder Bremen in 2019 from Hannover 96, having previously played for the Green-Whites between 2006 and 2014. The attacker has made a total of 135 Bundesliga 2 appearances, scoring 47 goals, as well as 28 goals in 94 Bundesliga games.

27.11.2022 / First Team
Your web browser ist outdated.
The web browser you are using is no longer supported.
Please download one of these free and up to date browsers.
Why should I use an up to date web browser?