Processing the defeat against Köln

It was not the start to 2023 that we wanted. In fact, yesterday was a really painful day, with all of the anticipation for the return of the Bundesliga washed away instantly. The 7-1 defeat away to 1. FC Köln was historic and showed us all that there’s a long way to go in order to stay in the league. “It's important that everyone understands that we’re a newly-promoted team in this league and if we don’t play to our limit, we’ll have some problems.,” said head coach Ole Werner. The turnaround is a short one with the next game, at home against 1. FC Union Berlin (Wed 25/01/2023, 20:30 CET), just a few days away, and the analysis on the defeat will be open and clear.

It started with a free kick move that went wrong for Werder. In fact, the first three goals that Ole Werner’s side conceded all came from their own set-piece situations. “Effectively, the first three goals were a result of our own doing,” said Werner. “We’ll process the result now and then analyse the causes of the goals. Then we have to address everything and make sure everybody is held accountable.” 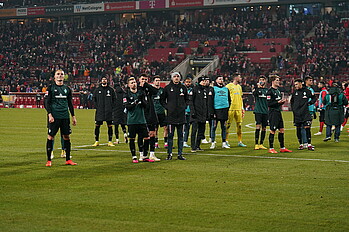 Speaking to the media after the game, the players and club officials spoke clearly. “Everything was missing, the game was dreadful,” said Clemens Fritz. Mitchell Weiser was quite self-critical and stressed that especially the older players have to question themselves. “Including myself, especially.” The character of the team is really called into question now. “We have to come out of this together as a team now,” said captain Marco Friedl.

Cohesion has been something that ha distinguished the team throughout the season so far. Ole Werner said in his year review that the game against Hertha BSC impressed him the most of all this season’s games, because the team did not let their current run of from impact them. The 34-year-old will now be hoping for a similar reaction in the midweek game against Union. “Everyone has to know that it only works if we give 100%. If not, we’ll have problems,” said Werner. “Today we were at eight, maybe nine per cent. That's not enough to be competitive."

It will never happen again. I can promise you that.

The only positive from Saturday was the great support shown by the Werder fans who travelled in large numbers. “You feel so ashamed after a game like that and despite it all, we had such great support until the very end – I've never experienced anything like that before," said full back Weiser. “We don't want anything like that again. It will never happen again; I can promise you that.”