“We could have put it to bed earlier”

Reaction to the DFB-Pokal game against Energie Cottbus

SVW have survived the first round of the DFB-Pokal with a 2-1 victory over fourth-division side Energie Cottbus and advance to the next round (see match report). Romano Schmid scored the first goal of the 2022/23 season in the 43rd minute before Mitchell Weiser made it 0-2 in the 73rd minute. Cottbus could only pull the scoreline back to 1-2.

WERDER.DE has the reaction to the tie.

On the course of the game:

Mitchell Weiser: “The opponents are already under way in the league. We had our first competitive game today and had this exact line-up for the first time as well. Regardless, we tried a lot and did lots of things well. In the end, it was an unnecessary mistake that got punished – but that is part of the learning process. We have to put it right for the league. I would say that the goal was more luck because Duckschi shot and the ball fell at my feet. We had lots of good attacking phases today that we spoiled with the last pass or the finish – but we can work on that and it will definitely get better.”

Romano Schmid: “We’ve achieved our goal and progressed. But we still have lots of work to do, especially on the details. You have to take the leap. Many have failed, so we can be proud of that. Nevertheless, Cottbus played well in the second half, but we were able to defend against it. That will happen in the league as well, and so that’s something we can take from the game. Now we will analyse our findings from the game together with the coach. We won the game, we’ve moved on and now we’re looking forward and focusing on the league.”

Ole Werner: “We played well overall, had lots of control and created many scoring chances. We could have been more precise with our final pass, then it wouldn’t have been so tense towards the end. At 0-2, we opened the door again through a little carelessness, so it became tight again. It’s not surprising here, in the first round, in front of a full house, when a team like Cottbus is attacking its own end that it can get more intense. We could have put the game to bed earlier, but our name is still in the pot, which is good.”

On winning player of the match: 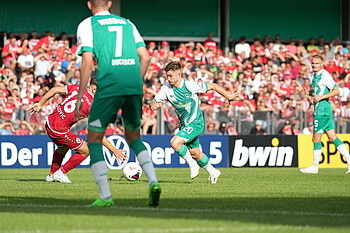 Romano Schmid: “I’m obviously proud to have been chosen as player of the match, even it wasn’t a great performance from me. I didn’t follow through a couple of situations in the first half and I have to do better, especially in the Bundesliga. I have to criticise myself for that. Despite that, I scored a goal and we won the game, so I’m pleased about that. It’s always hard to tell where you’re at in the cup and the opposition always know that they have a massive chance. We took it very seriously, didn’t allow them anything in the first half and should have been a little bit efficient at times, especially in the final third. We’ve got through to the next round and I’m convinced that we can show what we’ve been working on next week as well.”

On the start of the Bundesliga:

Mitchell Weiser: “We’ll take on board what didn’t go well today as we prepare for the start of the Bundesliga. At that level, we will be punished for simple mistakes. If we get punished today, you can be sure that we’ll get punished for it in Wolfsburg, so we have to avoid making them. A lot of things went well in terms of our play on the ball, but we know that we won’t have as much time in Wolfsburg.”

Ole Werner: “That definitely wasn’t a test for the Bundesliga – it is a completely different competition. Today we were the clear favourites and in the Bundesliga we’ll be the underdogs a lot of the time. However, it was important to get the job done today, also as we didn’t play in front of many big crowds in pre-season and it’s something you have to get used to again. It’s definitely a boost for us to have won our first competitive game, but next game is a brand new challenge.”