The first friendly of SV Werder’s summer ended in defeat. Ole Werner’s side started the game well and created several good opportunities, before a deflected Benjamin Goller shot gave the Green-Whites the lead midway through the first half. Both sides changed their entire team at the break. The VfB players took advantage of some sloppy Werder build-up play and turned the game on its head. Affamefuna-Michael Ifeadigo’s brace (55’, 62’) and Marco Schultz’s goal with a quarter of an hour to go (76’) gave Oldenburg the win.

Line-up: Werder’s squad was a mixture of youth and experience. The starting line-up included returnee Benjamin Goller and U23 players Marc Schröder and Lasse Rosenboom. Eleven pairs of fresh legs came onto the field in the second half, including newcomers Niklas Stark and Dikeni Salifou and youngsters Jakob Löpping and Jascha Brandt.

A high tempo for both sides 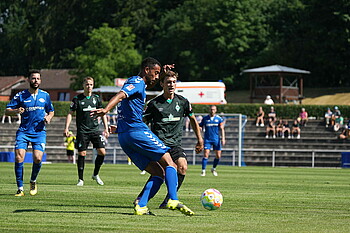 Benjamin Goller took his first chance to give Werder the lead. (Photo: werder.de)

The highlights of the first half

4’: SV’s first opportunity. Werder combine well on the right-hand-side. Schmidt brings the ball into the middle, Goller makes a good run but an Oldenburg player clears the danger.

26’: GOAL FOR WERDER! The ball finds the back of the net! Benjamin Goller gets the ball and runs to the byline. His shot is deflected and finds the far corner.

34’: Adetula receives the ball in midfield and has a powerful shot on goal. The ball just misses the target and is VfB’s best chance of the game so far.

36’: Fullkrug shoots from a central position. The Oldenburg goalkeeper is up to the task though, and keeps the score at 1-0.

Oldenburg turn the game on its head 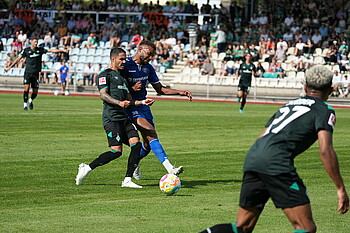 VfB's staunch defence were touch to break down. (Photo: werder.de)

The talking points of the second half:

46’: A completely different set of players takes to the pitch for the start of the second 45.

55’: An equaliser for VfB. Werder fail to clear the ball from a free-kick into the penalty area – Ifeadigo heads the leveler home.

62’: Oldenburg lead. A mistake in Werder’s build-up play allows Ifeadigo in. He rounds Dos Santos Haesler in the SVW goal and finishes with ease to turn the game around.

71’: Werder look to break forward for an equaliser of their own. Jascha Brandt makes his way into the box and crosses in, but the ball is overhit and Oldenburg clear with ease.

76’: VfB increase their advantage through Schultz. He latches onto an errant Nicolai Rapp throw-in and makes no mistake from inside the penalty area. 3-1, the final score.

Summary: Werder’s first pre-season friendly started with lots of energy and tempo, which led to the opening goal through a deflected Benjamin Goller cross on 26 minutes, a just reward for their efforts. A second goal was on the cards, but the second half saw the Green-Whites lose their cutting edge against a defensively sound Oldenburg side. VfB were then able to punish SVW’s mistakes and turn the game on its head.