Since 2017, Frank Baumann and Florian Kohfeldt have led Werder together (photo: Nordphoto).

Florian Kohfeldt has been the head coach of SV Werder Bremen since November 2017. He is the third head coach, after Viktor Skripnik and Alexander Nouri, to have previously been in charge of the Werder U23s before managing the first team. His appointment marked the return of a euphoric atmosphere to SVW.

Not only did Kohfeldt unleash the team’s abilities to take hits and carry on fighting, he also gave the team, somewhat atypically for a struggling side in the bottom half of the table, a more courageous offensive approach, which became increasingly prevalent in spite of a few early setbacks. A run of poor form and a period of great suffering was ended thanks to a dominant 4-0 win over Hannover 96 in Kohfeldt’s second game in charge.

Werder Bremen had been winless in the Bundesliga for seven months, the previous win coming way back in April 2017 against Hertha Berlin. At the beginning of December, Bremen also ended a much older bone of contention. It had been ten-and-a-half years since the last away win over Borussia Dortmund, but goals from Maximilian Eggestein and Theodor Gebre Selassie led the team to a 2-1 victory at BVB, breaking a long-standing duck.

Even though this initial success was not enough to pull Werder out of the relegation zone by Christmas, these important victories and a 3-2 win against Freiburg in the DFB-Pokal were good conciliation ahead as 2017 drew to a close. For Kohfeldt, a “very important message” had been sent: “We can rightly say that we have a lot of quality and we will find it in the Rückrunde,” he prophesised.

All relegation fears blown away 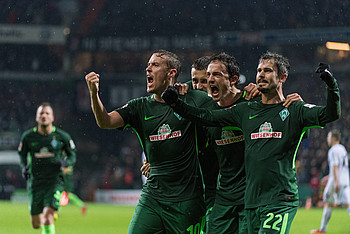 The team was not to ignore the assignment given to them by their head coach. Yet, a few wins still went begging during the first few weeks of the new year. The sincere applause of former FC Bayern head coach Jupp Heynckes was, however, a definite signal of Werder’s improvement. The away trip to Munich gave a clear sign of continued positive development: “They didn’t just come here to defend, like so many other teams. They played with clear attacking intent,” Heynckes said.

Soon after, Bremen were starting to back up their forward-thinking style of play with consistently positive results. Within two months, between the start of February and early April, any fears of relegation had been totally banished thanks to 19 points in eight games.

Bundesliga survival was secured by consistent performances that saw Werder rank as the fifth-best team of the Rückrunde. Kohfeldt was already focused on the next step: “We need to consider the way, in which we made it a success. But in the long run, simply remaining in the Bundesliga can’t be our only goal.” 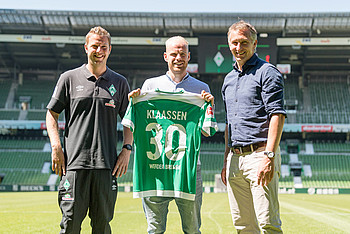 In summer 2018, it wasn’t only Davy Klaassen who arrived at the Weser (photo: Nordphoto)

However, the club had had to make do without an indispensable talisman in the early period of Kohfeldt’s reign. Zlatko Junuzovic, who had inherited the captain’s armband from Clemens Fritz, returned to his homeland of Austria after six-and-a-half years at the Weser and almost 200 competitive matches for Werder. Thomas Delaney, who was a nailed-on starter, made the switch to Borussia Dortmund and had to be replaced. However, all the courage, creativity and initiative that was demanded of the team by Frank Baumann and Florian Kohfeldt was about to be shown over the course of the 2018/19 season, both in their openly ambitious goals for the future and shrewd additions to the squad. They were fuelling a spirit of optimism.

It wasn’t only the signing of ex-Ajax captain Davy Klaassen that caused a stir. The return of Martin Harnik, Yuya Osako, Nuri Sahin and the eternally-young Claudio Pizarro also bolstered the squad. Where the road would lead was still unknown. “Before the season began, we made a commitment to walk a hard path, to qualify for Europe. We are not going to shy away from this goal,” Kohfeldt had said after the bitter 3-2 defeat in Leipzig, which saw Werder head into the winter break in 10th place, having taken 22 points in the Hinrunde. He knew full well that “we have too few points for the football we have been playing. But the way we are playing is fine. This team has very strong character. I am looking forward to the Rückrunde.”

A great week for the club’s 120th birthday celebrations

What his team was capable of was evident on and off the pitch during a week of almost constant goosebump inducing moments surrounding the anniversary of the club’s founding. On 4th February, 120 years since Werder Bremen was founded, the club hosted a birthday dinner, before 2,500 merry fans celebrated the release of the Lauter Werder album in the “Alte Werft” three days later.

Barely 48 hours before, Werder had played in an epic DFB-Pokal round-of-16 tie in Dortmund in front of 81,000 spectators. Claudio Pizarro and Martin Harnik both scored equalisers in extra time (3-3), before Max Kruse sealed the win, converting the crucial penalty in the shootout. “You couldn’t suffer more setbacks, you couldn’t get more emotion, coupled with cleverness, out on the pitch. It was simply outstanding” – Kohfeldt was elated. The icing on the cake of these halcyon days was the brilliant 4-0 victory over FC Augsburg and with it the gap to the European places was reduced to just three points.